Went on down to the good old Barnes & Noble yesterday. I’d actually thought that all big chain book stores had gone out of business (wow, I’ve been out of it), so it was a pleasant surprise to know that I can still buy overpriced books at Barnes and Nobles! Oh, the joy!

Although I walked in the door with a budget of just one book–just one, I tell you–I walked out with two books (oh, the horror), because I’m not capable of limiting myself to just one book. Why even try? But. at least I set a “budget”, otherwise I would have walked out of those doors with twenty books (and absolutely no money to my name).

I’m super excited about these two books, though! 🙂 DUALED BY ELSIE CHAPMAN 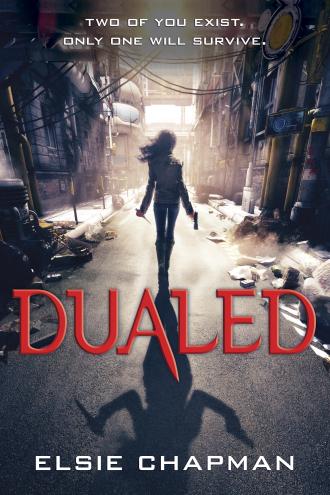 The Hunger Games meets Matched in this high-concept thriller where citizens must prove their worth by defeating the other version of themselves—their twin.

Two of you exist. Only one will survive.

West Grayer is ready. She’s trained for years to confront her Alternate, a twin raised by another family. Survival means a good job, marriage—life.

But then a tragic misstep leaves West questioning: Is she the best version of herself, the version worthy of a future?

If she is to have any chance of winning, she must stop running not only from herself, but also from love . . . though both have the power to destroy her.

Check it out here.

Before I even knew how to work NetGalley, they pre-approved me for this book’s sequel, Divided. Somehow, I signed up to read it, but I haven’t read the first one yet! Luckily, Barnes & Noble had the first one. I already started it and, I must say, this book is pretty amazing! The cover appears a bit cheesy (yet another lesson to not judge a book by its cover), but don’t let that fool you! So far, this novel has adventure, the promise of romance, and plenty of suspense and action. I’m really excited to keep reading this one.

THE IRON TRAITOR by Julie Kagawa

In the real world, when you vanish into thin air for a week, people tend to notice.

After his unexpected journey into the lands of the fey, Ethan Chase just wants to get back to normal. Well, as “normal” as you can be when you see faeries every day of your life. Suddenly the former loner with the bad reputation has someone to try for—his girlfriend, Kenzie. Never mind that he’s forbidden to see her again.

But when your name is Ethan Chase and your sister is one of the most powerful faeries in the Nevernever, “normal” simply isn’t to be. For Ethan’s nephew, Keirran, is missing, and may be on the verge of doing something unthinkable in the name of saving his own love. Something that will fracture the human and faery worlds forever, and give rise to the dangerous fey known as the Forgotten. As Ethan’s and Keirran’s fates entwine and Keirran slips further into darkness, Ethan’s next choice may decide the fate of them all.

Check it out here.

Ahhhhh, I thought that The Iron Prince was the last novel that Kagawa was going to write in this series! Ever since I spotted this book series in a supermarket in Colorado two or three years ago (random, I know), I’ve been such a big fan of these books. I don’t usually read books about faeries, but Julie Kagawa creates such an unforgettable and flawless Nevernever world in her Iron Fey series. I’m so pumped to read this one.

So, yep, that wraps up today’s book haul! Did you buy/receive any books recently?