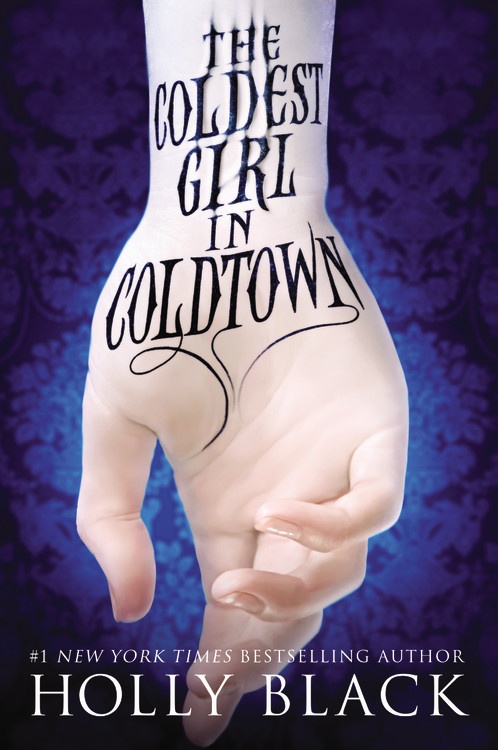 Tana lives in a world where walled cities called Coldtowns exist. In them, quarantined monsters and humans mingle in a decadently bloody mix of predator and prey. The only problem is, once you pass through Coldtown’s gates, you can never leave.

One morning, after a perfectly ordinary party, Tana wakes up surrounded by corpses. The only other survivors of this massacre are her exasperatingly endearing ex-boyfriend, infected and on the edge, and a mysterious boy burdened with a terrible secret. Shaken and determined, Tana enters a race against the clock to save the three of them the only way she knows how: by going straight to the wicked, opulent heart of Coldtown itself.
The Coldest Girl in Coldtown is a wholly original story of rage and revenge, of guilt and horror, and of love and loathing from bestselling and acclaimed author Holly Black.
PUBLISHER: Little Brown
PAGES: 432
~*~*~*~*~
I was given this book by a nearby book company and I just want to say, as always, that fact does not affect my opinions about the novel I am about to review.
WOW! WOW! WOW! WOW! I am speechless about this novel by Holly Black. I’ll admit that I’ve never read a book by her (I tried one of her faerie novels, but just couldn’t get into it), but – dang – this one was amazing. I also told myself that I had sworn off vampire books because they all seemed like copies of each other after awhile. I love that this novel has the tagline of “a wholly original story” in the end of the book blurb and, truly, it was a nice, unique, and refreshing take on the “vamp” genre.
This story follows a young, brave/reckless girl named Tana. The morning after a particularly unremarkable party, she wakes up to find that nearly all of the party-goers are dead and her flirty ex-boyf has been bitten and is now infected (in Holly Black’s terms… Cold). Plus, to complicate things even further, there’s an attractive vampire boy in the room with her ex and he seems to be hiding something big. The Coldest Girl in Coldtown tells Tana’s side of things: her journey to find herself and discover what it means to be human in a vampire-dominated world. It’s a thrill ride with plenty of suspense, sass, and just the right amount of macabre details.
MORAL RATING:
PG/PG-13: Some sexual-ish insinuations, dark themes/imagery, and violence (but, honestly, what do you expect?). Remember: This book is about vampires. It’s going to have blood and gore. They’re vamps, bro. It’s in the title.
THE GOOD:
I had so much fun reading this book and I wonder why I waited so long to read it! The characters are really well-developed (and I’m always stingy about that). Tana is a spunky heroine with gobs of bravery and determination. I want to meet her. She sounds absolutely BA. And Gavriel – Don’t even get me started. At first, I didn’t know how to feel about him. He’s one broken, confusing, and hecka complicated vampire. I expected this book to be more of a romance than what it turned out to be. Don’t get me wrong, I’m all for the romance. But, I loved how that wasn’t the focus of the whole novel for once. Tana didn’t feel like she needed to focus on finding someone to love her, but rather cared deeply for the people that were already in her life. So, when the lovey stuff happened, I was even more open to it than if it had been one of the driving plots of this book.
THE BAD:
I don’t know. Some of the descriptions of the vampires sucking blood/craving blood seemed almost too real for me at times. I’m kind of squeamish, so it’s mostly personal. Kudos to Holly Black for making the whole Coldtown idea seem so real, though. I have to give it to her! Right now, I can’t think of much that I explicitly did not like about the book. I’m sure this will change after I think more about the book, but right now – I’m in love. 😉
I give this book a 5/5 because I did not expect to love it so much and…  I squealed like a little girl while reading it. If you’re sworn off vampire books – I know I had – give this one a try before you quit for good. It’s worth it. I promise.