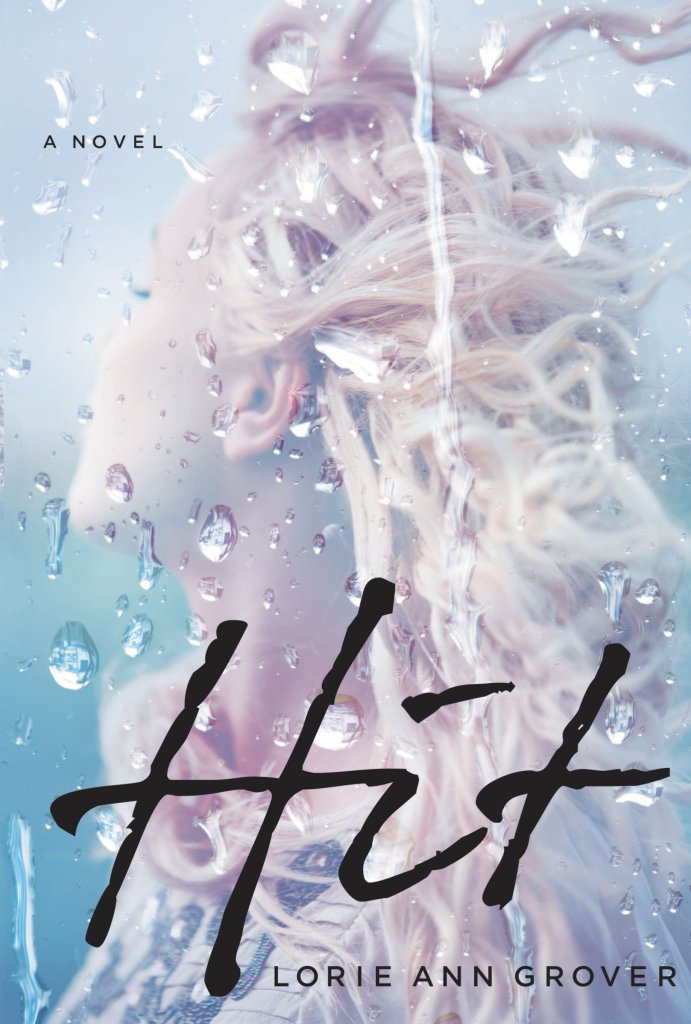 After receiving a full-ride scholarship to Mills College for Girls, it appears Sarah’s future is all laid out before her that is until she walks into a poetry class led by Mr. Haddings, a student teacher from the nearby University of Washington. Suddenly, life on the UW campus seems very appealing, and Sarah finds herself using her poetry journal to subtly declare her feelings for Haddings. Convinced Mr. Haddings is flirting back, she sets off for school in the rain with a poem in her back pocket one that will declare her feelings once and for all.

Mr. Haddings has noticed Sarah’s attention; the fallout from any perceived relationship with a student is too great a risk, and he has decided to end all speculation that morning.

But everything changes when Mr. Haddings feels a thud on his front bumper when he glances away from the road, and finds Sarah in the street with blood pooling beneath her.”

A huge thanks to Blink, Booklook Bloggers, and Lorie Ann Grover for a copy of this book! All opinions expressed in this review are my own honest opinions and they are not affected by my receiving this book for free.

Based on a true story, Hit tells the story of a young and infatuated Sarah. Even though she knows it’s wrong, she’s head-over-heels in “like” with her poetry teacher, Mr. Haddings. While he’s driving to school one rainy morning, Mr. Haddings takes his eyes off the road for a few seconds. Unfortunately, in those couple seconds, he doesn’t see Sarah crossing the road in front of him. Set over the span of three days, both Haddings’ and Sarah’s lives are turned upside down due to a tragic car accident.

PG: Teacher/student relationship and some violence

First off, can we just talk about this cover for a second? This cover is GORGEOUS. The rain, the hair… EVERYTHING. It’s so beautiful. It probably places in my top ten of beautiful covers (and that’s saying something).

I’m always quick to request books set in Seattle because Seattle is very near and dear to my heart. Pike Place, the Space Needle, the buckets and buckets of rain… loveeee it!

This book was a relatively quick read. While I had a lot of problems with it, I was constantly questioning what was going to happen next. Whether I was held in suspense over Sarah and Haddings’ relationship or Sarah’s health, I needed to know what was going to happen! And, at the end, I felt like I still had so many questions that weren’t resolved! Ah, partial cliffhangers!

There were a lot of things in this book that didn’t jive with me.

First of all, I can’t imagine how complicated and tragic it would be to have a sister or a friend go through what Sarah experienced in this novel. This book is based around the drama of the car accident. But, boy, did this book have drama. And I’m not talking about the kind of drama that is justified; this is the kind of drama that is so over-the-top that you cannot take it seriously.

I can do drama. When books over-dramatize events–no matter how tragic they are–I can’t take them seriously. Haddings, the teacher that hits Sarah, is horribly victimized by the family.

“I can’t believe the guy’s not even in jail,” Luke mutters. “I want to smash his face with my fist. Run him down with my truck.”

“Well, I could tear his head off.” Luke thumps his heel on the carpet.

“…You made my friend look like a freaking Frankenstein, some Tim Burton character, you idiot.” She jabs me with her finger. “…you’re so stupid…it makes me sick to look at you.”

Poor guy! Hitting Sarah was a total accident and, while anger is normal, there are at least 15-20 instances of the family hurling violent threats at Haddings.

“Who would do this to my child?” [the mom] says, voice rising.

Dude, calm down. Haddings didn’t mean to hit your child. I understand anger and tragedy–believe me, I’ve been through plenty–but, the mom is a complete and total mess. She’s yelling at the people around her to stop crying, jabbing her husband in the chest, and just being a general crazy. She’s more concerned over how her daughter will look after surgery than if her daughter will even be okay after surgery. That, my friends, is unfortunate and sad.

There is this weird focus on Sarah’s beauty. After going through a car crash, no one expects you to be America’s Next Top Model glamorous. The older son, Luke, spends most of his time at his sister’s bedside talking about how hideous she looks.

Wow, what a sweet, supportive brother. I tried to put myself in the character’s shoes and imagine myself as Sarah and my little brother as Luke. He’s apparently a junior in high school and he has a girlfriend. Even my little brother (who is the same age as Luke) would probably be focusing more on the fact that I am alive than on repeating how hideous I look after brain surgery. And, if Luke is that immature and treats his sister like crap, I have no clue how he’s NOT single. But, wait, here are some more:

“Can’t they cover up the grossness?” asks Luke.

“I can’t believe I couldn’t wait to see her! I just wanted to be sure she didn’t look like a freak, but she does! Look how huge her head is. Don’t you think her skin’s actually green? And those black stitches and red ones clumped with brown blood chunks. Oh, man. She looks like death. A zombie, right?”

I really wanted to like the characters, but I felt like they were all pretty selfish and rude. It’s a given that their day isn’t going well and they have a lot of stress on their shoulders, but I had a problem with nearly all of them.

The relationship between Haddings and Sarah is ambiguous. The reader understands that Sarah has feelings for Haddings, but it’s never quite clear if Haddings reciprocates these feelings. Nevertheless, he does feel a great amount of guilt from hitting her and causing her and her family so much pain. Rightly so! That being said, at the end of the day, it was all an accident. Forgiveness is important and I wish there was more of a focus on forgiveness in this novel. There are little tidbits, but also so much anger and violence.

The writing style is choppy and unorganized. It reads more for tweens than teens. It almost felt like Grover was writing down to her audience which made reading this book uncomfortable at times.

Honestly, you get my point. I don’t really want to go on…

I love this song by Natalie Grant. It’s so slow and beautiful. If I had just been in a car accident, I’d want to hear this song.

Overall, I’d give Hit a 2/5 heart rating. I was really hoping that I’d love this book more than I did… The poor writing and the over-dramatization completely turned me off to this book. 😦

My roommate, Trisha, read this book before I got to it. I asked her to briefly way-in on her opinion of the book!

The storyline was good. It was definitely different–a lot of stories are recycled these days–and I found the whole story twist of the teacher hitting the student interesting. She appreciated the Seattle setting being represented well (she was quick to point out that this was unlike iCarly, where Seattle was not repped appropriately).

My roomie had pretty much the same issues with this book that I did–the drama, childish writing, etc.