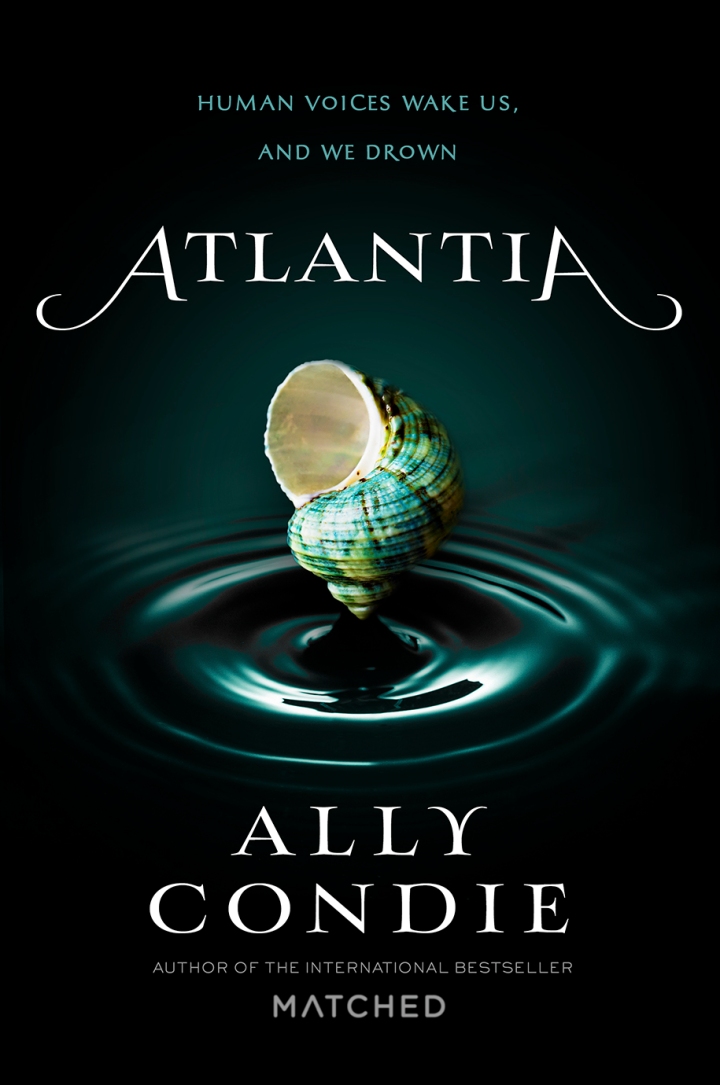 Can you hear Atlantia breathing?

For as long as she can remember, Rio has dreamt of the sand and sky Above—of life beyond her underwater city of Atlantia. But in a single moment, all her plans for the future are thwarted when her twin sister, Bay, makes an unexpected decision, stranding Rio Below. Alone, ripped away from the last person who knew Rio’s true self—and the powerful siren voice she has long hidden—she has nothing left to lose.

Guided by a dangerous and unlikely mentor, Rio formulates a plan that leads to increasingly treacherous questions about her mother’s death, her own destiny, and the complex system constructed to govern the divide between land and sea. Her life and her city depend on Rio to listen to the voices of the past and to speak long-hidden truths

I received an ARC of this book through Penguin’s First to Read program in exchange for an honest review. Thank you Penguin and Ally Condie!

I read Matched a couple years ago and, while I think I’ve become more critical of my YA lit in the time since then, I liked the series then. Or, at least, I liked the first 1.5 books. I gave up on the trilogy after that because I was bored.

Ally Condie has a very beautiful, descriptive voice that dominates this novel. Her rich wording did not make it hard for me to visualize the world of Atlantia and the underwater kingdom had a certain delightful magical mystery to it. I think Condie has come a long way since Matched and her writing has vastly improved.

I think I know what Condie was striving for when she wrote this book, but it fell flat for me. I had an incredibly hard time reading this book.

There was this sense that Condie is trying to write this beautiful, mystical underworld city called Atlantia and it breathes and talks and all that magical jazz, but all of her otherworldly descriptions became tiring after awhile. The reader is in Rio’s head more than they’re listening to her dialogue with other characters. And, let me tell you… Rio Conwy has a lot that she thinks about. She thinks about the bats in the temple, who to trust (this is actually a legitimate concern — props to you, Rio), and whether everyone else hears the walls of Atlantia breathing and living. Plus, the descriptions of Atlantia sometimes border on the overwhelming side. Everything is described in minute detail. I’m all for the author painting a scene or a character’s surroundings, but there were times I was tempted to skim because I was falling asleep.

I didn’t feel a connection to Rio’s desperate plight to be reunited with her sister. In fact, I didn’t really feel much of a connection to Rio at all. The book moves at a sluggish, languid pace — one that I’m sure many readers won’t have a problem with, given the beautiful underwater world that Condie writes — but I expected more action and intrigue. When one of the characters died, I didn’t even find myself caring. That, my friends, is disconcerting. It reminded me of when Catherine dies in A Farewell to Arms and any grief over her death (pretty much none, in case you were wondering) was overshadowed by the extreme joy I felt to be one page away from the end of the novel that had taken over my summer. I apologize to any of you Hemingway fans out there, but when a book reminds me of my feelings for the characters of Hemingway’s works (pretty much complete and utter mehhh, in case you were wondering), I feel very sad. I want a book’s characters to spark my interest and grab my attention! I want to be able to relate to a character and see myself in them. And, even if the character lives in the bottom of the sea (is that you, Spongebob?), I still want to be able to see some part of myself in them, good or bad.

Rio was strong and determined, but her narration fell flat. One of the reasons that she didn’t stick out to me was probably a result of the slow-moving plot. I didn’t see Rio doing anything truly risky or dangerous. If you’ve read the book, you may be crying out right about now. But, Erin! Rio does this and this and this! You know, she may have broken through the glass of Atlantia with a wrecking ball to get to her sister for all I know. Even that, however dramatic and foolhardy it is, would fall flat if it took 2/3 of the book to get to that point. I understand creating tension is important, but by the time Rio put certain plans in action, I wasn’t excited anymore. To be honest, I felt kind of upset and let down by that point. I’d slugged through her racing and love life and didn’t have any more room to feel excited that she was finally (finally) carrying out with her plans. Yes, she needed more money to be able to put her plans in action, but this book isn’t one of those “Based on a True Story” books. A bit more more tension could’ve been easily crafted with the events of the novel or plot’s pace.

There were also certain parts of the novel that were never really explained. There was an annoyingly large bit of the world-building dedicated to sirens. I know that they are incredibly important to this novel, but it reminded me of that large twelve-page (?) section of Stephanie Meyer’s New Moon where Jacob is relating the tribe’s history to her (you all know exactly what I’m talking about, don’t roll your eyes at me). We’ve all been there; we all fell asleep during that section. There’s no shame in admitting it. The love interest may be expanded on in later books, but it didn’t really make me jump for joy in this book. Man, I sound like a real life Grinch, don’t I? My heart must be two sizes, too small. While True is a nice boy and felt a little more 3D and lifelike than Rio, he didn’t stand out to me. He was one of my more favorite parts of the novel, though. The ending wrapped up very nicely with a pretty little bow and cherry on top, too. In case you were wondering. You probably weren’t, but… anyways.

I love this powerful ballad by talented singer and songwriter, Gabrielle Aplin. This song’s slow pace and rich lyrics speak to Rio’s struggle to be her siren self and to her desire to be reunited with those she loves.

Overall, I’d give Atlantia a 2.5/5. I think that there’s going to be plenty of people that like this book, so I’m not saying that you absolutely shouldn’t read it! If you are like me, though, and need a book that is more fast-paced and action-driven, you may want to research this one a bit more before you open it up. It was extremely, extremely, extremely slow. It took me a little more than a month to finish it. I was really hoping that I’d like this book more than Matched, but I felt let down by this one. 😦