Kat inspected rows of the same old cupcakes. They seemed to blink back at her, as if they knew she was capable of so much more.

Kat Varland has had enough of chocolate, vanilla, and strawberry.

At twenty-six years old, Kat is still living in the shadows of her family in Bayou Bend, Louisiana. Still working shifts at her Aunt Maggie’s bakery. Still wondering what to do with her passion for baking and her business degree. And still single.

But when Lucas Brannen, Kat s best friend, signs her up for a reality TV bake-off on Cupcake Combat, everything Kat ever wanted is suddenly dangled in front of her: creative license as a baker, recognition as a visionary . . . and a job at a famous bakery in New York.

As the competition heats up, Lucas realizes he might have made a huge mistake. As much as he wants the best for Kat, the only thing he wants for himself her is suddenly in danger of slipping away.

The bright lights of reality cooking wars and the chance at a successful career dazzle Kat s senses and Lucas is faced with a difficult choice: help his friend achieve her dreams . . . or sabotage her chances to keep her in Louisiana.

First of all, a huge thanks to Zondervan and Betsy St. Amant for giving me a free e-book in exchange for an honest review! I really appreciate it.

Ah, I feel like I’ve been away from this blog for ages, but it’s only been a couple of days! I’ve been living out of my suitcase lately even though I’m technically “home” and haven’t had the opportunity to post. I’ve been lost, but with this review — I am found! 😉

As always, it’s a treat to read a Christian contemporary romance. I love clean romances so I was excited when I was approved for this one.

PG: Very, very clean. I’d just say “PG” because it does seem to be geared towards an older audience, but there’s nothing besides a few kisses

Oh, sweet niblets, the title and cover of this novel make me want to dance in the streets. The cover makes me feel like I’m swimming in a pool full of milk chocolate. This cover is simply divine. I can’t take my eyes off of it. I may have even requested this novel partly for the cover (judge me, but you probably requested/would request this novel for the same reason). I liked the idea: small town cupcake artisan feels held back and is given the chance to branch out and bloom. Plus, there’s a little love action on the side. Actually, a lot of love action on the side. I really loved that this was a clean romance. I didn’t have to worry about having to claw my eyes out after stumbling onto a raunchy scene every single chapter. Refreshing! Also, Betsy St. Amant’s writing is captivating and turned out to be one of the redeeming points of the novel for me.

For me, this novel fell apart at several key points.

First of all, the two main characters, Kat Varland and Lucas Brannen, didn’t pop for me. They weren’t memorable. Kat seems almost too insecure to even function and while Lucas seems to be the stronger — and smarter — of the two, he can’t seem to figure out that Kat has the hots for him until the last quarter of the novel. Yes, any woman can relate to Kat’s insecure side, but the author had Kat switching between being domineering and insecure and I couldn’t put both sides of her personality together. It’s clear that Betsy St. Amant was trying to create a character that her readers could relate to, but I was put off by Kat Varland and didn’t feel any strong connection to her.

This story is told from the POV of Kat and Lucas (switching narration) and I usually love that style. After the first 20% of the novel, however, the reader has pretty much heard it all. Kat likes Lucas. Lucas likes Kat. Kat likes Lucas, but she thinks he sees her as just a friend. Lucas likes Kat, but he thinks she sees him as just a friend. This repeats over and over and over throughout the novel. If you didn’t get the message in the first 20% of the novel, I guarantee that you will understand who likes who by the end. In fact, it may be permanently tattooed onto your skull by the last page. Good luck scrubbing that one off. Besides the cupcake competition (one of the main parts that kept me engaged), I already knew what was going to happen. Because of this, I couldn’t help but skim. I really don’t think I missed much. It was very repetitive and I became easily bored with both of their narrations. 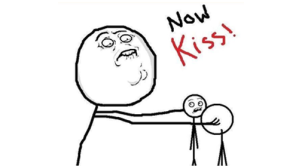 I just needed them to realize that they both liked each other and finally —finally — move on to bigger and brighter things.

Also, this is a Christian novel. I’m a Jesus person myself and have read my share of Christian romances. I felt like the way that Christ was woven into this story was pretty sloppy. Christ wasn’t brought up much, and, when he was brought up, it seemed awkward and random. That’s just my personal interpretation. Christ can use anything to touch a person’s heart and, man, I understand how hard it is to believably interweave Christ into a fictional contemporary romance. It’s hard! I haven’t read many that incorporated Christian themes in a believable manner, so, at this point in my reading career, this doesn’t really affect my final feelings about a Christian novel.

There were some other problems I had with this novel (such as Kat’s mean family and Lucas’ protector complex), but I named the main ones!

Lauren Aquilina’s Fools is the perfect soundtrack for this one. It’s a bit slower than I would have imagined, but I think it perfectly embodies Kat and Lucas’ fear of losing their friendship when they take things to the next level.

Overall, I’d give this one a 2.5/5. The writing was good, but the story plot and characters were flat and uninteresting. After awhile, I couldn’t take the doe eyes these two were making at each other and had to start skimming.

4 thoughts on “Review: All’s Fair in Love and Cupcakes by Betsy St. Amant”