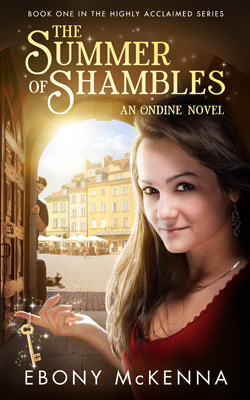 Dive into this wonderfully witty young adult series from author Ebony McKenna, set in the far off European country of Brugel.15-year-old Ondine is struggling to fit in at Psychic Summercamp and doubts she possesses any of her family’s magical abilities. She resolves to leave, determined to follow her own path and be a normal teenager. Whatever normal is in a place like Brugel.On the way home Ondine is shocked when her pet ferret Shambles starts talking – in a cheeky Scottish accent no less! He is in fact a young man trapped in a witch’s curse. When he briefly transforms into his human self, Ondine is smitten. If only she can break the spell for good, Shambles can be handsomely human on a full-time basis.During the summer, these two misfits uncover a plot to assassinate a member of the royal family and discover a secret treasure that has remained hidden for decades. This attracts the attention of the arrogant Lord Vincent, and Ondine can’t help being drawn in by his bad-boy charm.With so many demands on Ondine’s attentions – and affections – normal has never seemed so far away.The Summer of Shambles is the first in the four-part ONDINE series. Fans of The Princess Bride or the Confessions of Georgia Nicolson series will love this delightfully quirky fairytale.
PUBLISHER: BookBaby
PAGES: 182
~*~*~*~*~
First and foremost, I received this book from the author (she’s so sweet!) and I would like to tell y’all that that did not affect my overall feelings about this novel. 🙂
Okay, so here’s the deal. This book is the first of four books in the Ondine series. It’s a fun, clean adventure from start to finish. Ondine is not having a very good time at Psychic Summer camp because she doesn’t believe that she possesses any of her family’s magical powers. She decides to ditch camp, believing that her move back home will be better than staying at camp and pretending to be something that she is not. Shambles, a quirky and sassy talking ferret, accompanies her on her journey home. They get along famously, but… Shambles is actually a young man cursed to wander the Earth in the body of a ferret! There’s also the very attractive and mysterious Lord Vincent who grabs Ondine’s attention from the first day she lays her eyes on him. Mix some boy trouble with family trouble and Ondine has a whole lot to deal with!
MORAL RATING:
PG: Kissing, some innuendos by the ferret (haha I’ve never written that before)
THE GOOD:
It’s been awhile since I’ve read a good, clean adventure! This book is perfect for any age or gender. Ondine is a clever and lovable female heroine who matches Shambles’ quick wit and humor throughout the novel. And one cannot forget Shambles… the best fictional ferret that I have ever had the pleasure of meeting. I think the writing of this novel was well-done and the pace of the novel was perfect! Plus, I enjoyed the unpredictable element of it.
THE BAD:
While I was reading this novel, I was a bit confused as to what the audience was for this novel. I guess it’s a YA novel, but I think it blurred the lines between Children’s Lit and Young Adult at times. That kind of threw me off throughout the novel. Also, I’ve never read about a talking ferret (who has? it’s very original!) so a talking ferret took awhile to get used to (for me, personally). After awhile, I got over it and grew to love the wickedly sassy ferret named Shambles/Hamish even more.
SOUNDTRACK:
Old school Jonas Brothers… Ondine and Hamish forever. 🙂
…and I have to add this song to the soundtrack because this book evoked such a classic, fairy tale feeling!
THE VERDICT:
Overall, I’d give Summer of Shambles a 3.5 (rounded to four) because it was a fun, entertaining read. When I get done reading the stack of books waiting for me, I’ll for sure be picking up the second and third books in the Ondine series!